In an epic finale, Josh has his world turned upside down as he unlocks the truth to his past.

Catch Up On the Reviews

The last time we saw the adventure upon Josh, it was last year May 29th 2020. As Ghost Island: The Exorcism #5 was released digitally for KS Backers. As much as I saw the ending fast approaching and who was sort of behind it, this finale was sort of what I was wondering in the back of my mind if he (Priest) belonged to something more to the Island. Again as much as I enjoy this “House On Haunted Hill” kind of vibe story, let’s see what I have to say about the grand finale of Joseph Oliveira and his team’s first ever story that has come to an end. Do the ghosts still linger? Could it really be “The End”. Or is there a chance for some sort of twist to possible see a return with our lovely protagonist, on trapped on a Island, but somewhere else.

The finale has risen, the dead can no longer be condemned. The truth pours out like a spiritual vision one would have if out in the woods, wanting to forget things or in this case, remember what was forgotten. I feel this quote below fits what I was originally feeling from this series, and let it be known as a very vital point indeed.

“You”ll never want to step on an abandoned island ever again.” 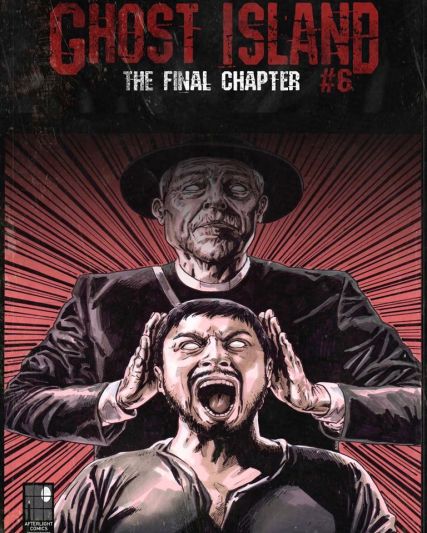 Afterlight Comics has finally put the final nail in the story of Josh, a Medium until proven guilty killing his wife. Can finally understand everything, Joey Oliveira and his team have created a nice tight solid story. “It’s a satisfying ending that started Afterlight Comics.” I will say I know in the previous reviews, I wanted to see more. But right now, the story is what matters. Did this end for all of us to enjoy? I believe the true fans from the beginning to present day, within the Ghost Island Universe will finally be able to find their own peaceful sleep, knowing that we didn’t get a lackluster ending that left us hanging around long afterwards. It’s enough to give us a nice “first season”, makes me wonder what sort of “ghosts” are waiting to be heard next from the amazing team of Afterlight Comics.

As an overall conclusion, this had a very nice twist and turn. I’m really glad I couldn’t predict this, but at the same time. I never went back to re-read, but I think there isn’t enough information to crack this story completely. But I also feel, the work of Ghost Island is far from over. Don’t miss out on this series, it’ll definitely be one of the top comic stories to see the light of days to come.

One thought on “Comic Review: Ghost Island: The Final Chapter #6”