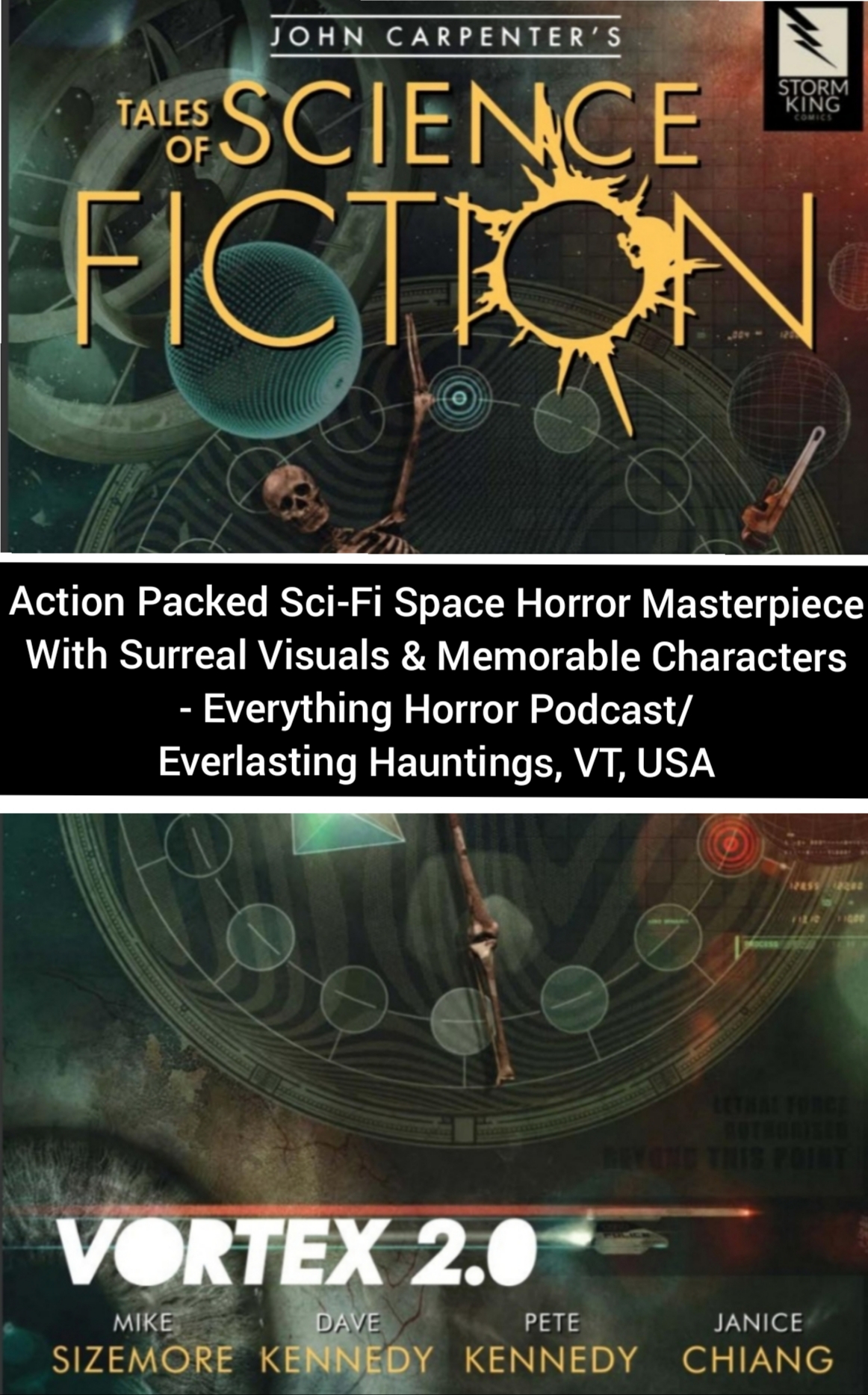 More than twenty years have passed since the Benson Station disaster as an unauthorized rescue mission brings the survivors together again. Now some 5,500 light years from home a familiar evil is rising with a score to settle.

Something is killing its way through the Barringer Habitat and Jake Dixon is the prime suspect. Now on the run with old ship mate, Anna Cheron, he’s fallen in with a gang that operate outside the law. As something alien once more unfurls it’s tendrils towards humanity Dixon is offered a new mission perhaps even more deadly than the last.

Team Behind the Book:

John Carpenter’s Tales of Science Fiction Vortex 2.0 trade paperback is a collection of 8 brilliant comic issues released earlier that tell the readers a Science Fiction story set in a distant future in which humans are space faring species and now they’ve found a magical cure to all the health problems thanks to an alien leech like creature that they voluntarily use.. But our protagonist, Jake Dixon, had a different experience and is determined to see what is the origin of this and what happened at the place where he lost his crew…

What sets Vortex 2.0 apart is the protagonist’s story which took a dangerous turn at the end of Vortex 1.0. As Mike Sizemore’s preface to this horror comic tells, the premise of the protagonist being a fugitive alters a lot of things and makes the story more exciting. Jake Dixon was accused of killing his crewmates and sent to Space prison for lifetime. It’s been 20 years since Vortex 1.0 events and when he had no hope of escaping, he was rescued from the prison by his former crewmate Anna Cheron and they both meet an interesting lady prisoner who tells them how she and her friends can help them to reach the Space mining place where the tragedy happened so that Jake can prove his innocence by finding out the truth. Together, they land on a Space Habitat city and plan their expedition to the supposedly alien infested Space mines (Benson Station Disaster). A familiar face from Vortex 1.0 who is grown up now has joined The Earth Government and is tasked to find and locate Jake Dixon.  Jake barely escapes arrest while on a Space Habitat and reach the place where the disaster happened 20 years ago. Once they reach the dreaded place, they see interlocked skeletons, messy buildings and traces of terrifying biological experiments. The mystery behind a friendly scientist and his alien connection is also revealed. Armed with a few guns, a giant human controlled robot, and their wits, Jake, his former crewmate and new friends try to uncover a secret that scares them beyond imagination…

The story is filled with cameos, references and influence from Vortex 1.0 and it is more enjoyable if you read them in sequence but even if not, this comic does a great job of explaining everything about the characters and the story in the least possible yet effective words. Well written dialogues and neat lettering make the comic conversation bubbles fun and easy to read. The illustrations are realistic yet it has a unique art style that makes each page like a painting. The story is told perfectly with editing and  storytelling that makes you go through the comic without ever feeling bored. There is blood, gore and violence since it does contain aliens, dismembered humans and has an overall scary feel to it. Thus, it is highly recommended for mature readers.

In conclusion, if you are a space and sci-fi fan, John Carpenter’s Tales of Science Fiction Vortex 2.0 is a treasure full of excitement, horror, drama, action, humor, and moments of awe! If you have never experienced something like this before, this will make you a fan of the genre and of course, Storm King Comics!

Out on Sept 15th 2021, this horror comic is a must in any Space and horror fans comics collection!

Buy the Vortex 2.0 Issues from here:

Buy the Trade Paperback of Vortex 1 & their issues here:

Our Reviews of Vortex 2.0 Issues:

Our Review of Vortex 1 Paperback:

Know more about the creators:

Our past articles about John Carpenter’s Science Fiction Graphic Novels:

Thank you so much for reading this! Please share your thoughts with us by leaving a comment below.

Horror Needs You! Please Donate via PayPal to help the noble cause of promoting horror genre & indie horror creators:– http://paypal.me/ehpodcasts OR Support us on Patreon:- https://www.patreon.com/ehpodcasts

Become a part of our crew, add value to your resume & make a difference in the horror industry in your free time!! Know more here:- https://ehpodcasts.com/hiring/

Horror Needs You! Please Donate via PayPal to help the noble cause of promoting horror genre & indie horror creators:– http://paypal.me/ehpodcasts OR Support us on Patreon:- https://www.patreon.com/ehpodcasts

KEEP UP WITH THE Horror News & Reviews!

Please Bookmark our site or Set as your Home Page:- http://ehpodcasts.com